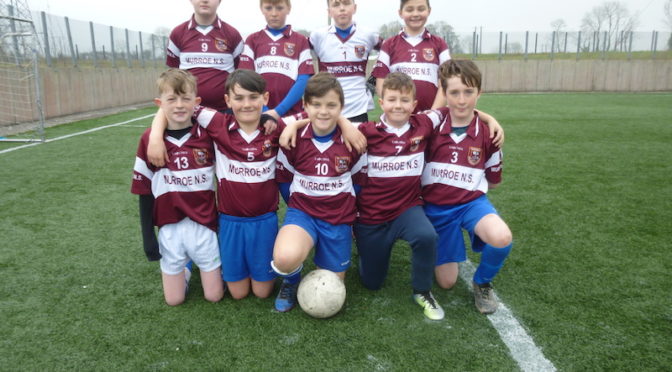 Scoil Mhuire N.S. participated in the second round of the FAI 5-a-side soccer tournament in the Sean Choill sports complex in Parteen on Thursday 12th April 2018.

The boys from Scoil Mhuire played three matches in total. They won their first game against Gaelscoil Sáirséal 4-0. They beat St Patrick’s 3-2 in their second encounter with a last second goal. Their final match was against Gaelscoil Chaladh an Treoigh. After an exciting and very close match which could have gone either way, the boys from Murroe eventually lost on a scoreline of 3-1.

The boys played sportingly and skilfully throughout the competition and were wonderful representatives of our school. With the exception of Joe Shanahan in sixth class all of the boys will be eligible to compete again next year.

Best wishes also to team member Jamie Long who missed out today due to an unfortunate wrist injury. We wish Jamie a speedy recovery.